Hello. It’s nice to meet you.

Our primary focus is providing small market stations with the digital space and resources to extend their brands, gain new listeners, and become attractive to a broader range of advertising clients. We have combined our polished content tools with the easiest content management system to use – WordPress. These make your site profitable while being super easy to maintain. 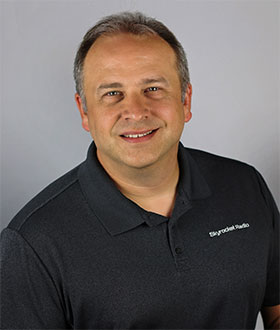 Jim got his start in radio at WLSM in the small town of Louisville, MS in 1988.  Since then he has worked on-air in all dayparts and has held nearly every other station position at one time or another.  Jim has worked for radio stations in several states and for iHeartMedia (Clear Channel Radio), CBS Radio, Cumulus Broadcasting, and a few small locally-owned stations.  He even hosted a morning show on an aircraft carrier for two years while in the Navy.  Jim has a passion for radio history, music, gadgets, and all kinds of geeky web stuff.

After 14 years at Clear Channel Radio, Jim left the industry in 2013 to devote full-time attention to his company, Mediagin Creative, a small freelance creative agency that develops WordPress websites as well as produces commercials for radio and TV.  After being asked by the Mississippi Association of Broadcasters to speak to a panel of small-market station owners about the need for better websites, it became apparent that an easy-to-use and low-cost solution was needed to assist smaller markets in competing for online ad dollars.  Skyrocket Radio was born.

You know people will talk...

"Working with Skyrocket Radio has been incredible since we launched our re-designed sites in 2016. Jim’s professionalism, expertise, and vision in the field have proven to be a success for our business and for our clients. Positive results are what we strive for every day, and Skyrocket Radio has gone above and beyond to help us thrive in everything we do."
Michael Brannon, Executive Vice President
Radio Alabama
"Skyrocket Radio websites are perfect for small to medium market broadcasters. Updating the sites is easy and they look great! Jim Sherwood knows radio and understands what local stations need to do online to be successful. "
Jay Philippone, Owner
Priority Media
"Jim Sherwood and Skyrocket have provided us with an excellent product, and service to match, for over ten years. Our sites are incredibly attractive and are designed in such a way to give my local staff a very powerful, flexible, easy-to-use platform that enables us to stay fresh and up-to-date. "
Lyman James, Owner
Sterling Broadcasting
"Lakes Media engaged Skyrocket Radio to move all station websites from a different provider in 2019 and last year, we combined all six of our individual websites into a common site with individual station pages.   The result was a compelling, attractive, and attention-getting site that enables us to cross-promote all Lakes Media stations.   We appreciate Jim’s creativity, knowledge, and rapid response and consider him to be an indispensable member of our team!"
Tom Birch, Owner
Lakes Media Network
"We have enjoyed working with Skyrocket Radio on building our new website. Jim made the transition easy! We are very pleased with the website and the flexibility we now have."
Brenda Johnston, Co-Owner
Zoo-Bel Broadcasting
"At Boswell Media, 50% of our advertisers are using a broadcast / digital bundle. Skyrocket Radio has been a tremendous asset as we position for more web, social and mobile."
Johnny Boswell, Owner
Boswell Media
"Skyrocket Radio is great. Working with Jim, we switched all our sites to Skyrocket. They look better and are far easier to update."
Larry Fuss, Owner
Delta Radio Network
"We love working with Jim Sherwood!  He is a radio guy, and a website guy, so he knows what we're looking for and can make it happen. We are independent station owners with 3 stations and I like that Jim is also independent.  With Skyrocket Radio you have direct access to Jim, which is very nice.  It saves a lot of time not dealing with middlemen and we get exactly what we want, or usually something even better.  Jim is a valuable part of our team.  He always has great solutions that save us time and money, and give us a superior web presence."
Dave Radigan, Owner
Radigan Broadcasting Group
"We have received numerous compliments on the look of our new website! It's absolutely perfect for radio stations. The design is very clean and smooth and it's been a lot easier to maintain and update than I expected. Jim Sherwood at Skyrocket Radio was awesome in putting it all together!"
Michael Dempsey, Owner
WRSR The Rooster
"Jim and the folks at Skyrocket radio not only helped us get our websites up, but walked me step by step through the process of making it work for myself. They are the best!"
Caston Countz, Operations Manager
Lee Airwaves

Do you prefer working with fellow radio people to achieve your online goals?  Then reach out to us.